The hard thing about preserving history is that it’s often scattered all over the place. Relics of Manatee County’s first settlers exist in the attics, basements and closets of relatives and even organizations that inherited these treasures for one reason or another. An old vault located in a closet at the Manatee United Methodist Church contained many of these sought-after remnants and yesterday I got to take a look inside.

Back in July, the Manatee County Historical Society (MCHS) approved funding to purchase an archival scanner to chronical evidence of the county’s earliest pioneers. Much of that history has already been scanned into a database that is available online and kept in the Eaton Collection at the Manatee County Library, but much of it is still out there.

One of the first organizations the MCHS collaborated with was the Manatee United Methodist Church in East Bradenton. Located at the former site of Manatee Village, it is considered the oldest church south of Tampa. The church historian, Joy Harshmen, has been part of the congregation for more than 60 years and invited members of the MCHS to look through and scan documents she considered vital records of county history. The documents were kept in a small vault in the closet of meeting room.

The antique safe was so big and so heavy, the closet was actually built around it during the last renovation. Another time the combination for the vault was lost and the cost to open it prohibitive for members of the church. One day some of the men were working in the closet and a book fell from the shelf onto the old safe. Luckily, the impact popped open the door, according to Darlene Thorpe Horner who served as the church secretary at the time.

It’s no wonder the church holds so much history. The earliest pioneers of Manatee Village organized and chartered a Methodist church in 1849. At first, services were held in the homes of the residents who graciously received traveling preachers of different denominations. These preachers were paid to travel the state on horseback in order to spread, and preserve, Christian values to rural areas. A small meeting house was constructed in 1859 adjacent to the village burying ground that served as a school on weekdays. For the next 16 years, the congregation relied on the services of the traveling missionaries, according to the Manatee United Methodist website.

In 1866, the original Manatee County Courthouse was sold at auction to members of the church for $128. A steeple and bell were added, finally providing the Methodists with their own house of worship, according to the church history. Over the years, the church has expanded, but many of the founding fathers are remembered through features of the original structures including two stained-glass windows that bear the names of Josiah Gates, G.H. Wyatt, R.H. Burts, J.A. Braden and more.

On Saturday the vault squeaked open to revel an array of interesting documents including some of the very first marriage records, photographs, drawings, maps and other important history. Archivists Tiffany Birakis and David Breakfield, members of MCHS, began the grueling process of scanning those documents – a step they anticipate could take several months as they are working on a volunteer basis.

Some of the more interesting pieces removed from the vault included a drawing of the original Gates Hotel and a map of Manatee featuring the original street names. A marriage registry revealed that many people remarried rather quickly after their spouses passed on. James Vanderipe, who lived in Manatee in the late 1800s, married Ellen McLeod on one page, then remarried Sarah Lee, on the next!

After the scanning is complete. The oldest and most relevant documents will eventually be transferred to the Eaton Collection at the Manatee County Library. The rest will be placed in archival sheaths and boxes and put back in the church’s fire-safe vault to be discovered again, one hundred years in the future.

Board Member takes on a forgotten family cemetery 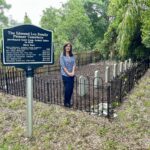