Board Member takes on a forgotten family cemetery

After discovering her ancestors were buried in a neglected cemetery used for decades as a garbage dump, one Bradenton woman set out to restore, and reflect upon, her heritage. Author and historical activist Peggy Donoho has a new purpose in life-preserving forgotten history, especially when it comes to her ancestors.

Donoho recently finished restoring a 25 by 45-foot cemetery, established in 1868, where seven of Manatee County’s earliest pioneers were laid to rest. The cemetery plot was located on the original homestead of Donoho’s great-great-grandfather, Rev. Edmund Lee, a preacher, judge, general store owner, and farmer that helped establish Manatee Village in the 1840s, living on the Manatee River. After his death, Lee’s step-children sold the homestead without excluding the old cemetery from the deed. The cemetery was forgotten, abandoned, and not maintained by new homeowners for over 100 years. The small plot was even used as a garbage dump, which was very upsetting to the community and family members, according to Donoho.

In 2017, Donoho gained guardianship of the cemetery under State Statute 704.08, which gives her authority as a descendent, to restore, maintain, and have access to the cemetery. This statute is meant to protect abandoned family cemeteries. The restoration took more than four years to complete. The Florida Public Archaeology Network conducted a scan in 2018 with grave penetrating radar to confirm the location of graves before the process began. The scan identified the following pioneers in the Edmund Lee Family Cemetery:

Donoho enlisted cousins, Terry and Matt Bailey, to help her clear the land of years of growth, including downed trees from Hurricane Irma. She raised money to create a historical marker honoring those buried there. She used her own funds to purchase and install a fence. The Manatee County Historical Society also funded headstones for the seven people resting there. A fifth-generation Manatee County native, Donoho grew up in Bradenton in a large family deeply rooted in Manatee County. Her mother, Marian Bailey Anderson, would tell stories of historic landmarks, tales of family members take her to local cemeteries. She was fascinated by the stories she heard at family reunions, special occasions, and holidays. The condition of the Lee Family Cemetery was always a sad subject. The family felt their ancestors had been dishonored by the cemetery’s state of neglect, feeling helpless to change the situation.

After graduating from Manatee High School, Donoho earned a degree from the University of Florida. She got married and had three children of her own, Landon, Andrew, and Evan. The family moved to Alpharetta Ga., but returned to Bradenton every chance they got. Donoho never really felt at home there. At times, she battled bouts of depression from feeling “land-locked” and was not fond of the long winters. Donoho felt drawn to return to her Florida roots. After her sons graduated from college and were on their own, she decided to make the move back for good.

Her new life in Bradenton opened up new opportunities. She had more time to connect with her family members and became infatuated with her family history. “I finally understood for the first time, how amazing my family heritage was and the importance of my ancestors, not just to me, but to the history of Manatee County,” she said. Donoho also discovered that her mother had collected a lifetime’s worth of research, genealogy, and rare, local history books. One story stood out in particular, the love story of her great-great-grandparents, Frederica and Miguel Guerrero, and their dream to come to America, raise a family and own their own land. They did and eventually passed down 47 acres on the coast of Miguel Bay in Terra Ceia to their sons.

The story could be a book, Donoho thought. She teamed up with a childhood family friend, local historian, Ron Prouty to write it. After two years of research and a trip to Menorca Spain, “Miguel’s Bay” was born. The book, which features the descendants of the Guerrero family, the Lees, and Fogarty’s, is a look into early pioneer life in Southwest Florida. During their research, Donoho and Prouty discovered the gravesite of Mary Guerrero Lee in the Lee family plot. She and her brother, Christopher Guerrero, were adopted by Edmund and Electa Lee after her parents died, but Mary died shortly after. The discovery inspired a new project – the long-awaited restoration of the Lee Family Cemetery.

The completion of the cemetery project and the placement of two historical markers—one at the Lee Cemetery and the other at the Guerrero Homesite on Terra Ceia Island, are two of Donoho’s proudest accomplishments. She’s also been instrumental in getting the book, “They Called it Fogartyville,” reprinted (the project is in the beginning stages). She and Prouty are also writing a second book together, which will tell the story of the Seminole Indians, set in the mid-1800s. What other restoration projects will Donoho take on? Only time will tell, but her newfound advocacy for historical projects around the county is inspiring many to take an interest in local history and I’m not mad about it! 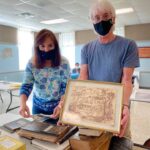